What Is Employee Engagement? 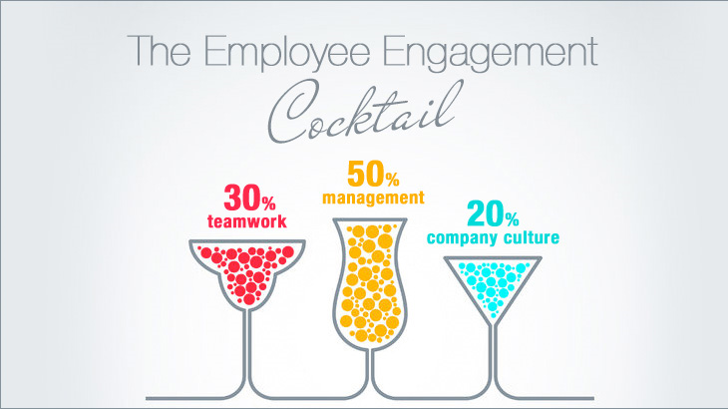 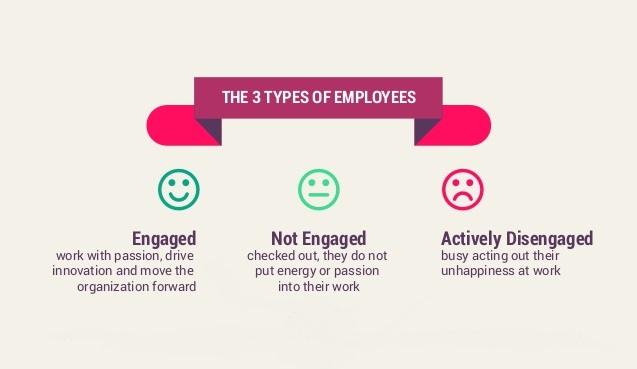 Why It Matters & Success Stories 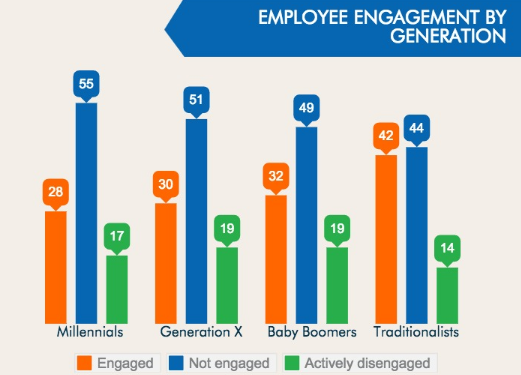 A study by Gallup found from a generational standpoint, that employee engagement is getting worse as the age of the employee is younger, with the Millennial generation the least engaged. This is something that must be noted since two-thirds of the American workforce are Generation X or Millennial. Gallup found on average only 33% of employees are engaged. The traditionalist generation is the most engaged at work at 42%. This is an issue because while they are the most engaged they are also the generation retiring the most. Unfortunately, those in my generation are the least engaged at work. With only 28% of Millennials engaged in the workplace.

An example of a company that succeeds in having a predominantly young workforce with extremely high levels of engagement is In-N-Out Burger. In-N-Out has a strong company culture that spans more than seventy years. Glassdoor has ranked the burger company one of the top 15 places to work for four out of the last five years along with having one of the best CEOs the past three years. They focus on selecting leaders with a servant leadership style who strive in engaging employees in a positive and team-oriented way that drives them to provide quality service to customers. Their online and in-person training programs are another focus. Their employees have told them they feel more engaged when they are growing and learning concepts surrounding their job. 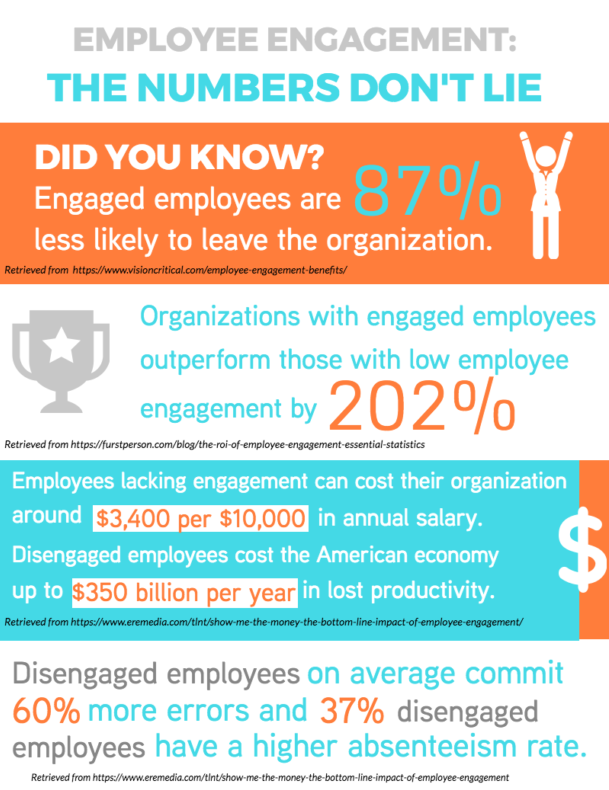 Another organization that thrives at having high levels of engagement is Toyota. Toyota focuses on listening to their employees along with putting trust in their everyday hands-on experience with their role. They field employee suggestions at an astronomical rate. Over the past half century, they have fielded tens of millions of suggestions. In one particular year they received more than 700,000 suggestions. This was on average of more than ten suggestions per employee. Toyota implemented over 99% of these suggestions. To put the impact this engagement has on Toyota’s business into perspective, if each of these suggestions were to save or create value of ten dollars per suggestion, this would be an impressive total of $70,000,000. 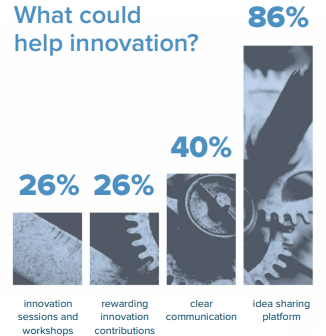 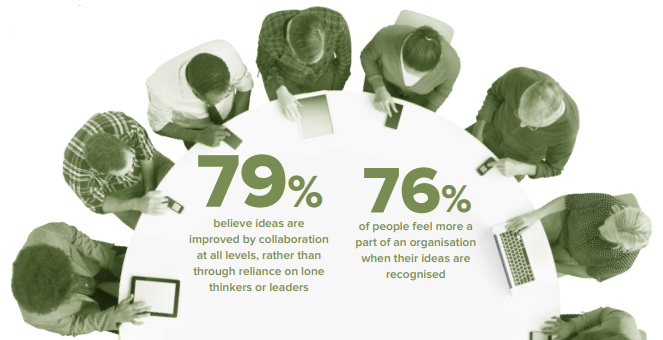 A survey of over 1000 employees from over a hundred organizations conducted by Cisco found what employees think would assist engagement and innovation. They found that 86% of employees think having an idea-sharing platform, such as DirectSuggest, could help innovation. 79% of employees believe that ideas are improved by collaboration at all levels. 76% of employees feel more engaged with their organization when their ideas are recognized. Considering the contributing factors of employee engagement, this survey proves the importance of having a company culture that encourages teamwork along with having management that collaborates with employees and recognizes them. 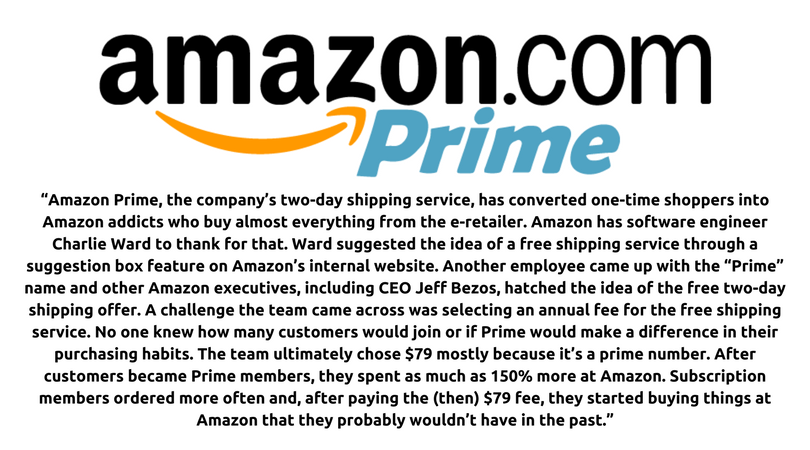 Possibly the most recent pivotal example of what can happen when a company puts a focus on engaging employees would be Amazon’s creation of Amazon Prime. At one time Amazon.com was known for selling books. Now most people know Amazon.com for their subscription-driven free two-day shipping, music streaming, video streaming, and much more called Amazon Prime. It is a membership many people cannot live without and has turned Amazon into one of the most valuable organizations in the world. This success would not be without an employee suggestion.

Amazon Prime was first implemented in 2005. Amazon had implemented a virtual suggestion box for their employees . They encouraged employees to leave good suggestions. A software developer by the name of Charlie Ward left the suggestion that would eventually turn into what we know as Amazon Prime. Ward came up with the idea for free shipping on product orders. After he came up with this idea CEO Jeff Bezos and other Amazon decision-makers concluded that a free two-day shipping service was the right idea. Once customers subscribed to Amazon Prime, the amount they spent on average increased by about 150%.

How Any Organization Can Enable Employee Engagement 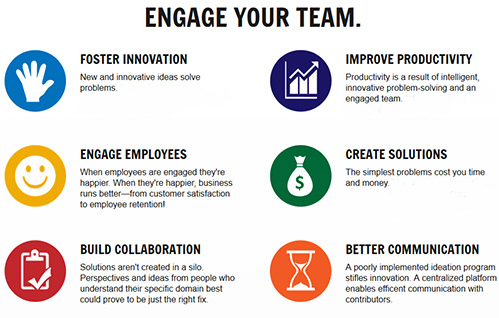 Communication between employee and employer is something that must be a priority. Direct communications must be able to reach everyone. The channel of communication must be two-way, so employee and employer can communicate with one another. Mobile and computer-based platforms should be used to make it as easily accessible for everyone in the organization as possible. If your organization creates a strategy and culture that engages with employees through proper avenues, technological or not, it will spark employee engagement, foster innovation, improve productivity, solve organizational problems big and small, and establish better communication built on collaboration.


Is your organization looking for an affordable and easy-to-use solution to capture employee suggestions? DirectSuggest, the suggestion box reimagined, connects your decision makers directly to your employees and makes it simple for an employee to make suggestions with the assurance that they arrive where needed. For more information please click here. 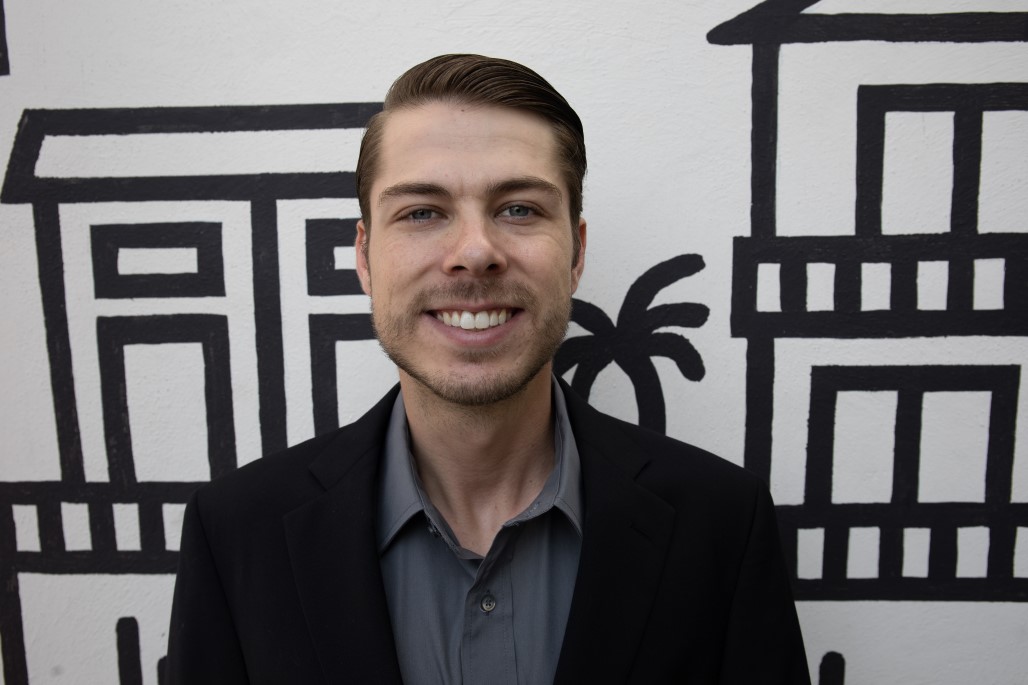 Riley Moore (https://www.linkedin.com/in/rileyrm4tech)
Riley Moore is a fresh face in the world of engagement and innovation. The 24-year-old CEO of RM4Tech, a family owned family run software company, has used his mix of technical and business influences to bring his creative vision to life. RM4Tech’s first solution, DirectSuggest, is the affordable and easy to use suggestion box reimagined. Another software product is scheduled for Q4 of 2018.